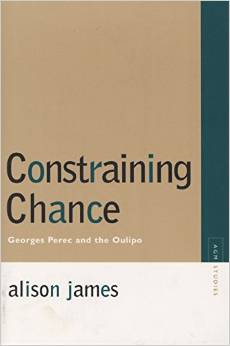 I have a critical attitude towards “chance,” and the role it might play in one’s writing process. My skepticism towards it stems from some of the creativity theories out there that try to downplay the role of the artist’s cognition, deliberation, and consciousness in the creative process. In the field of creative writing, much has been said about the advantage of spontaneity or automatism, and how overthinking can ruin an original idea. One example is the “flow”-based rhetoric that circulates in many writing guidebooks, which advocate abandoning conscious control over the writing process. Since I don’t believe in such a theory (partly because of my own writing and teaching experience, and partly because of the research that I have done in this regard), I have held an anti-chance attitude towards writing, meaning I believe in being in full control of the writing process or being fully conscious and deliberate in the decision making process. That’s the recipe for original and quality writing as far as I am concerned.

Indian classical literature of last two thousand years is about to be available; quite an authoritative version this is going to be; a project funded by Murty Classical Library, executed by famous South Asian literature scholars around the world, and published by Harvard University Press.

To say that all the sitcoms are orchestrated by a strict and identical plot formula is quite a bold claim indeed. In the article “Cracking the Sitcom Code,” Noah Charney precisely makes such a claim. He analyzes in depth the storyline of one of the episodes of Parks and Rec to prove his point. Watching Seinfeld and Arrested Development (two of my favorite sitcoms) I never could have imagined there’s anything formulaic about them. They always seemed such outliers and nonconformist to the genre expectations. But then what Charney says in the conclusion of his article caught my attention: “Next time you settle in to watch a sitcom, keep this code in mind, and an eye on your stopwatch. You’ll be amazed at how tight and to-the-minute the formula is, yet marvel at the variety that TV writers conjure within this straitjacket literary form.” So to learn that there’s a pattern to all the sitcoms does not drain the fun out of them; instead, how some shows become so remarkable and ingenious within the formulaic constraints should become our focus. For any creative writing teacher like me who believes that writing constraints are not anti-creativity but have a useful role in teaching craft and experimentation, Charney’s article may have some pedagogic value.

As the semester winds up and I am getting ready for the next semester’s classes, I also look forward to reading the students’ evaluation (with equal amount of anticipation and weariness). Bit of dread over what might have gone wrong. But then there is always exhilaration in finding some surprising result. As I have been thinking about the evaluation process for some time and how to make it more useful, I am glad to have found this article. I feel bit better now knowing that I am not the only one who dreads negative feedback.

A very useful insight into the job interviewing process. It’s very easy for a job candidate to feel nervous and overwhelmed, and skip an important opportunity to ask questions to his interviewers. After all, an institution where he or she plans to begin a career needs as much reciprocal evaluation. This article reminds the job candidate of the relevant questions that need to be raised during the job interview.